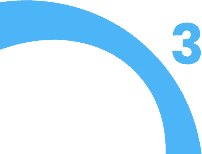 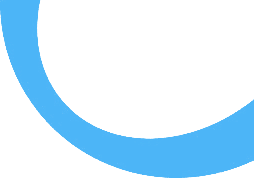 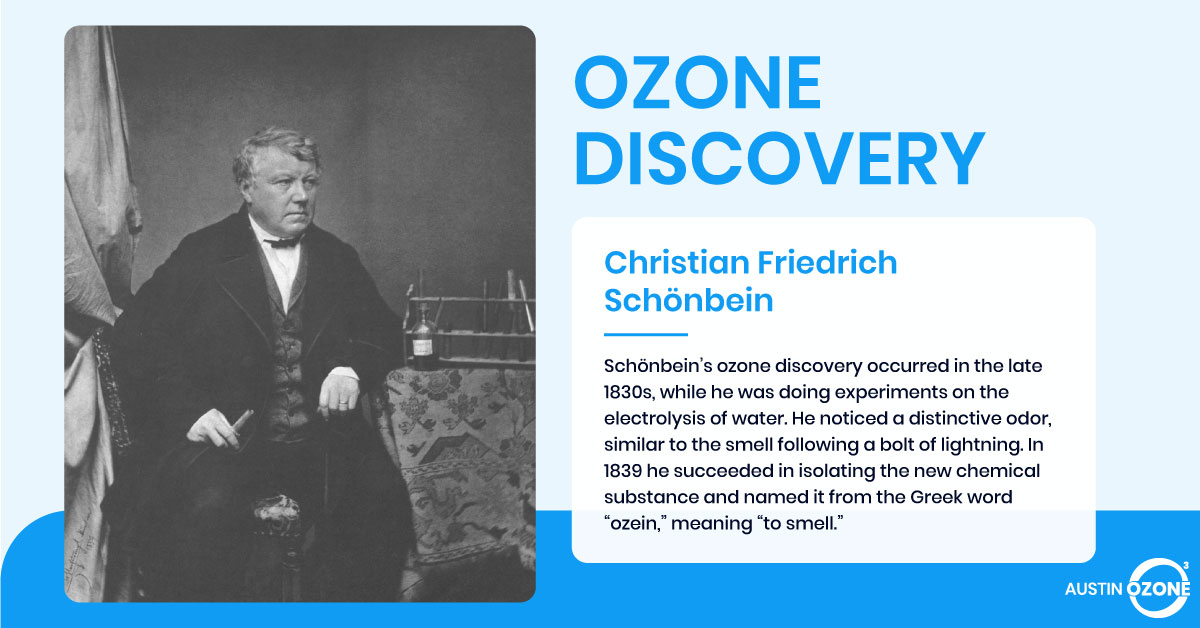 The discovery of the chemical known as ozone gas in 1840 is credited to Christian Schonebein, a professor of physics and chemistry at the University of Basel. Professor Schonbein also invented guncotton (methylcellulose) and explored the use of hydrocyanic acid to stop meat putrefaction, demonstrating the possibility that meat could be preserved for long periods of time.

This was a large leap forward in the history of ozone, and our thinking about oxidative processes. During the time of his studies of meat preservation, he contracted anthrax. He died on August 28, 1868. While he also advocated the use of ozone as a possibility for the control of infectious diseases, he was unable to use it to stop his own ultimately deadly infection.
Some eleven years after Schoenbein’s death the chemist Werner von Siemens invented and patented the ozone “super induction tube”, a means of generating ozone. This was an important step forward in the use of ozone gas because it recognized the fact that because the gas is unstable, unstorable, and highly reactive, ozone needs to be generated immediately before its use.

Among the first uses in the history of ozone was the disinfection of water. Today more than 2500 cities throughout the world use ozone in the water purification process. These cities include Los Angeles, Montreal, Moscow, Kiev, Paris, Amsterdam, Singapore, and Florence to name a few.
The first ozone generator devised for medical use was made several decades after Siemens invention. It was devised by a physicist named Joachim Hansler (1908-1981). His company’s device greatly enhanced the spread of the use of ozone in medicine.
Another critical step in the history of ozone in medicine is that of a photometric device for measuring the concentrations of ozone. Without such a device, the safety of various concentrations of ozone could not have been established.

History of Ozone: Beginnings in Medicine

Born in 1871, the Austrian surgeon, Edwin Payr, became acquainted with ozone when it was used on him by his dentist, E.A. Fisch. Dr Fisch applied for a patent on an ozone generator called “Cytozon,” now used in medical ozone generators today. Dr Payr became so enthusiastic about medical ozone that he ultimately published a 290 page book entitled, “On Treatment with Ozone in Surgery,” which he presented to the German Surgical Society in Berlin. This was the beginning of the use of ozone in medicine as we know it today.

Medical ozone was used during the First World War to treat gangrenous wounds of German soldiers.
Dr P. Aubourg, a French physician was the first to publish a paper in 1936 on infusion of ozone rectally in the treatment of chronic colitis and fistulae.
In the 1940’s autohemotherapy, the administration of a small quantity of the patient’s ozonated blood began.
The use of medical ozone was developed and is accepted in Germany. It is tolerated by France, England, Italy, and Canada, and 14 states in the United States. There is still some concern as to the legal status of medical ozone with regard to the United States Federal laws.
Today the use of ozone in medicine and most of the research in medical ozone takes place in Cuba and Russia. In fact, ozone therapy is in the medical mainstream in Russia, and especially Cuba. 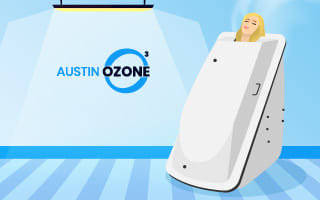 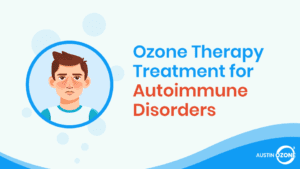 The material appearing on this Website is intended for informational and/or educational purposes only and has not been evaluated by the Food and Drug Administration. It is not intended to diagnose or treat any disease or person and should not be used as a substitute for professional medical advice. FDA Disclaimer | Privacy Policy
AustinOzone-Facebook-Icon AustinOzone-Twitter-Icon AustinOzone-Linkedin-Icon
512-605-1696  | 3530 Bee Caves Rd. STE 110b Austin, TX 78746
Copyright © 2022. All Rights Reserved. www.austinozone.com
Scroll to Top